Virgins – Not Made of Pink Sugar

To understand anything, the first thing you have to realise is that the devil cannot create anything. All he can do is ruin that which has been already made. That means that a lot of good ideas are going to be mistaken for bad ideas, because his twisted versions of the good ideas are making the rounds scandalising people and causing pain.

This is certainly true of the idea of virginity as something to be valued or honoured. The most malevolent corruption of this idea is that ‘reverence’ which consists of fetishising the biological signs of virginity. At its worst, it leads to female genital mutilation (which, by the way, is proof that this ‘reverence’ is satanic in origin. Ask any exorcist you like; physical mutilation is always, always, always a sign of demonic influence) but even in its milder forms – such the permanent social stigmatisation of the non-virgin, or even just patronising remarks from people whose business it isn’t – this kind of ‘reverence’ isn’t in keeping with the rest of Christian virtue, if for no other reason than it betrays the supreme fact that the soul is greater than the body, and that sin begins in the will. Why else to do you think it is that St Mary Magdalene, commonly assumed to have been a prostitute or an adulteress or both, is ranked with the virgins?

However, this corruption is not the point of this post, so any comments involving sentences like ‘the patriarchal fetishisation of the hymen’ will be immediately deleted, because they will mean you didn’t actually read the two paragraphs I just wrote. (And in which I got in first with ‘fetish.’)

No, here I wanted to think about that other distortion of the idea of virginity, which is less malevolent, but still deeply annoying, and that is the presentation of a holy virgin as something saccharine, dewy-eyed (if she raises her eyes to look at you at all), timid, and prone to fainting.

Let me make some things clear.

1) When we praise virginity, we are not praising the mere state of not-having-had-sex. A totally gross fifty-year-old man addicted to video games and pornography may happen to be biologically virginal, but he gets no credit in the eyes of God, the Church, or anyone else for that.

2) Catholic language (‘jargon’ if you like) is full of shorthand. When we praise the virgin, we mean the consecrated virgin. And how is consecration made? It is made in the will, which means that when we praise virginity rightly, we praise it primarily for what it reveals about a particular attitude of mind, heart, and will. Mostly we mean someone whose consecration is binding, public and permanent, but even where we praise a temporary commitment (i.e. before marriage) we’re praising virginity as the most obvious part of a bigger package, which is a commitment to God.

3) It’s a little like the way some people talk about longing for marriage, when what they mean is ‘marriage and romance and babies.’ They don’t just mean the wedding day. They don’t just mean the honeymoon. They don’t just mean the ring. ‘Marriage’ means all-of-the-above…and more. So does virginity. Have you ever heard of a consecrated virgin who didn’t fast? Who didn’t pray? Who slept in every morning? Who didn’t work? Who lived in luxury? Of course you haven’t! You haven’t, because it doesn’t exist in isolation. You can’t give your heart to God and then only practise one virtue. You have to practice them all. Which means no one should think or talk about virginity without understanding it in its proper context, which virtue in it’s entirety, for the worship of God and openness to His action in your life in a specific way.

4) Furthermore, virgin-saints are not venerated because it’s fun to know who had sex and who didn’t. They’re venerated because virginity made them powerful. I just mentioned openness-to-God. We all know the spine-tingling presence of the Other when we feel it, and they transmit it, and so we get down on our knees and venerate it, because it’s impossible not too, once you’ve felt it. It is right to worship Almighty God, so it’s right to venerate any window through which His power makes itself felt – and one of those windows is the consecrated life. The proper context for the respect for virginity is power – the divine power which called the virgin to consecration in the first place, the divine power which sustains that consecration, and the divine power which is shared with us by virtue of that consecration.

5) This is why, historically, your consecrated-virgin-saints were not sugary, doe-eyed, or limp. And this is why depicting them as though they were is such a grave injustice to them. Canonised virgins were not the opposite of non-virgins. They were the opposite of witches. They were praying, fasting, spine-tingling, bilocating, wonder-working, battle-hardened grace machines, and they must be understood in that context, because if you don’t understand them in that context, you’ll start thinking that virginity is all about the body, and soon you’ll turn into the repugnant individual in paragraph two.

6) This holds true even if you don’t believe in that context. Maybe St Margaret of Antioch never hacked her way out of the stomach of a dragon. The point is that her devotees had no trouble believing she did, because they associated the consecrated virgin with strength, courage, and conquest – no fear or shame in sight – and so should we.

7) Our Lady identified herself at Guadalupe as ‘She Who Crushes the Head of Serpent.’ Her titles include ‘Exterminatrix of Heresies,’ and ‘Virgin Most Powerful.’ One of her Old Testament prefigurements killed a man by smashing in his head with a mallet, and another decapitated her enemy with a sword. When a member of the Ku Klux Klan tried to kill the father of one of her students, St Katherine Drexel rushed to that father’s aid, and the Klansman was struck with a bolt of lighting. See where I’m going with this?

8) Okay, okay, I’m not saying we should all rejoice in violence. I’m saying we should think twice before portraying consecrated souls as enfeebled or oppressed. In fairness, I should say that I suspect that for many people, the wide-eyed sugary stuff is kind of restful. Life is hard, and sugar is sweet, and they choose it with the best of motives. Just because your holy card is awful doesn’t mean you don’t have real love in your heart or real faith in your mind. I just don’t think it’s fair! Let us stop portraying our favourite saints, both male and female, (and, worse, Our Lady!) as though they were nothing more than scrupulous pre-adolescents deficient in Vitamin K. No matter what kind of religion you hold – or even if you hold none at all – just remember that praised virginity, in it’s proper context, is, first and foremost, a force of the intellect and will, and it exists for only one reason: 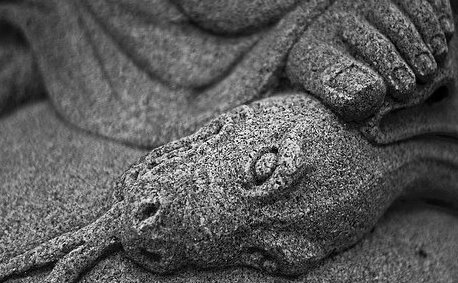